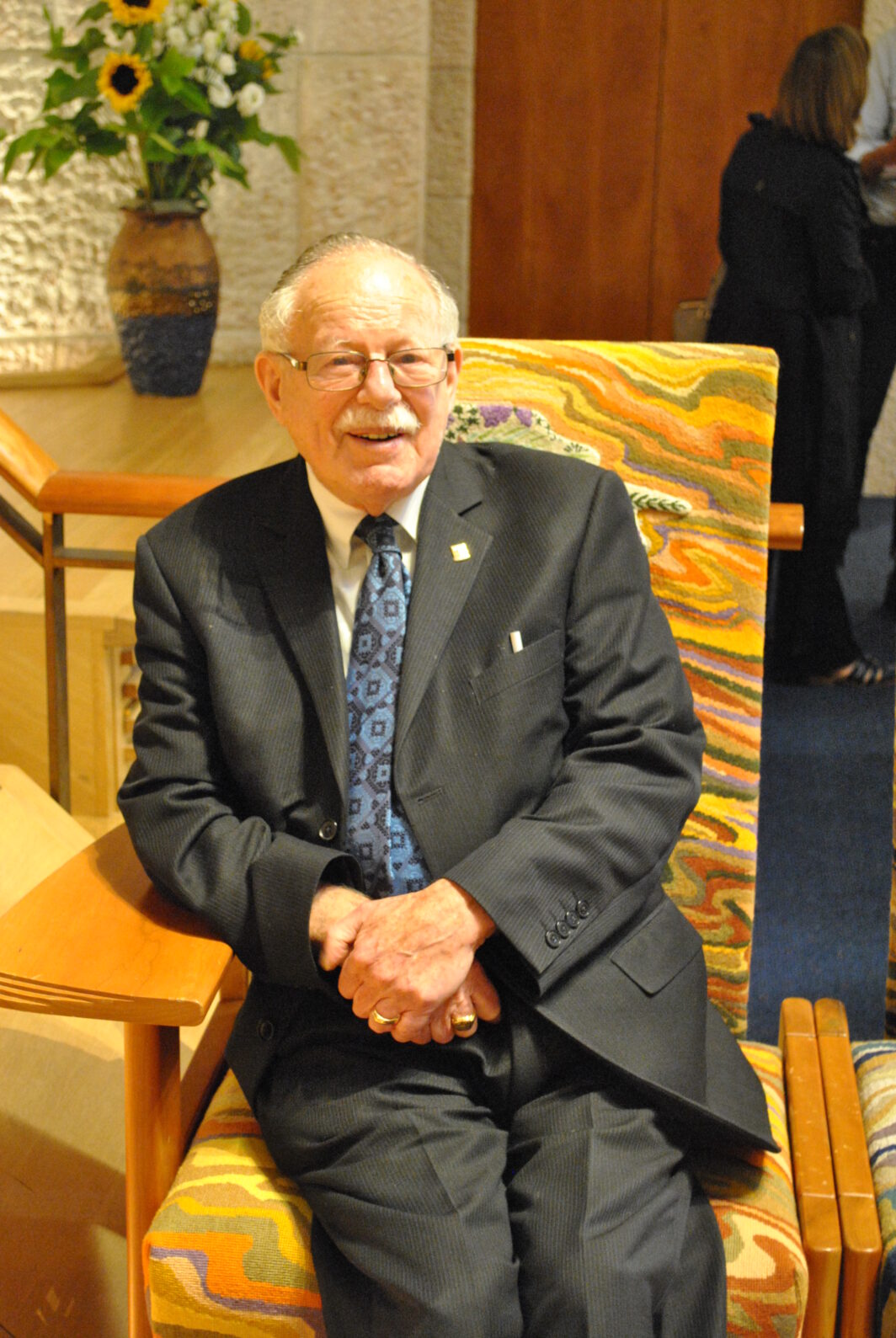 Tributes from all over the Jewish community, and beyond, have poured in for Liberal Judaism vice president Rabbi Harry Jacobi MBE – who passed away peacefully on Wednesday morning, aged 93.

In the words of his children, Harry “was clear-minded to the end and faced this head-on, just as he approached so much in his life”.

Liberal Judaism’s senior rabbi, Rabbi Danny Rich, recalled how Harry inspired all those who came into contact with him – using his own experiences of twice escaping the Nazis to become a powerful and lifelong advocate for both Liberal Judaism and those of all faiths and backgrounds still fleeing persecution.

Danny said: “I will always remember Harry as my teacher, friend and colleague. Harry was, for me, what being a Liberal Rabbi was all about.

“His spiritual presence has been, and remains a towering one for his family, his communities and the Liberal Jewish movement.”

He celebrated his bar mitzvah in Berlin on 22 October, 1938. It turned out to be the last one at the Friedenstempel Synagogue, which was destroyed on Kristallnacht 18 days later.

In February 1939, he was transported on the guarantee of his uncle from Berlin to Amsterdam. Having left his parents behind, Harry and the other children were temporarily housed in the internment camp in Rotterdam where he caught diphtheria. Fully recovered after a spell in hospital, but unable to live in his uncle’s already overcrowded flat, Harry lived in an orphanage.

Just as he was starting to rebuild his life Holland was invaded by the Nazis, on 10 May 1940. Five days later, a non-Jewish woman Truus Wijsmuller-Meijer, one of the ‘righteous gentiles’ subsequently honoured by Yad Vashem, hired buses to take Harry and others to the port of Ijmuiden, where she persuaded the captain of the Steamship Bodegraven to take 40 children and a few adults on board and sail away.

Holland capitulated two hours later. The Bodegraven was the last ship to leave. It came under machine-gun fire from German planes, causing Harry to dive to safety under a lifeboat. He survived the journey and the ship was finally allowed to dock in Liverpool four days later.

Harry spent the remainder of the war years in Manchester, working as a motor mechanic and living in a refugee hostel. The Jewish Brigade was established in 1944 and though Harry immediately volunteered, he wasn’t called up until the end of the war. He served from 1945-1948 as a driver in Belgium, France, Germany and Holland.

During this time, Harry discovered that his grandparents, parents, aunt, uncle and one cousin had all perished at the hand of the Nazi regime.

His remaining relatives in Holland had survived and Harry returned to Amsterdam in 1948 to work for his uncle, Louis Jacobi. Louis was an instrumental figure in the post-war rebirth of the Amsterdam Liberal Jewish Community. It was here that Harry first met Rabbi Leo Baeck (president) and Lily Montagu (secretary) of the World Union for Progressive Judaism (WUPJ), who had come to encourage and support the revival.

In July 1949, Harry visited London as a Dutch youth delegate to the sixth international conference of the WUPJ. Rabbi Leo Baeck ended his presidential address by saying: “God waits for us.” Harry credits these words with changing his life.

With the help and encouragement of Leo Baeck and Liberal Judaism founder Lily Montagu, he changed his mind about going to Israel and instead prepared to study for the British rabbinate. He served as lay minister in Aberdeen from 1952-55 and, after a bursary from the Israel Mattuck Memorial Fund to support his studies, was ordained “reverend” in 1961. He received his rabbinic ordination in 1971.

The WUPJ was influential in more ways than one – especially as it was through their youth section’s pen friend programme that Harry met his wife-to-be, Rose Solomon. They were married at North London Synagogue in 1957 and had three children – Richard, Margaret and David, all of who also became deeply involved in Liberal Judaism.

In 1961, the day after being ordained as reverend, Harry was inducted at Southgate & District Liberal Synagogue (now Southgate Progressive Synagogue), where he served as reverend/rabbi until 1975 and then, for the rest of his life, as emeritus rabbi. He is very fondly remembered at the community, where a service will take place in his honour.

Harry also spent time during these years visiting new and growing Liberal Judaism communities as a ‘foster rabbi’, especially those in Liverpool and Dublin. He also reached out beyond Judaism, fostering relations with all religions and serving on many interfaith bodies including the national executive of the Council of Christians and Jews.

Harry accepted an offer to become rabbi of Wembley & District Liberal Synagogue (now Mosaic Liberal Synagogue) in 1975. After seven successful years at Wembley, in 1982, Harry and Rose then took up a new challenge with the Progressive Jewish congregation of Zurich, Switzerland.

Harry was also chair of the Rabbinic Board (now Beit Din) of Liberal Judaism for a decade – showing great compassion and guidance for those undertaking the conversion process – and one of the officiating rabbis at the annual AJEX Annual Ceremony and Parade.

Throughout his life, Harry also used his experiences to try and support today’s refugees. In public, he led high profile campaigns with the likes of Lord Dubs and Unicef to highlight the plight of those fleeing Syria and other war-torn countries. In private, he offered advice and support to those young people following the same path he did as a teenager. In November, he was part of a campaign calling on the Government to provide a new Kindertransport.

In recognition of his contribution to the life of the Jewish community and to interfaith relations, Harry received an MBE in 2006.

Rose died in January 2014 and David – a research scientist, gifted cellist and Liberal lay leader – sadly passed away in 2017, with Harry helping to set up a scholarship fund in his name to assist talented musicians from disadvantaged backgrounds. Through all this, Harry enjoyed exceedingly close relationships with Margaret and her husband David Ehrlich, Richard and his wife Lyn and his grandchildren and great-grandchildren.

In December at East London & Essex Liberal Synagogue, Harry had the honour of taking to the Bimah once more to bless his great-grandson and namesake, Harry Newham.

Over the next few weeks, Liberal Judaism will be running tributes, memories and pictures of Harry on this website, the Liberal Judaism social media channels and in our bimonthly magazine LJ Today. Our thoughts are with the Jacobi family at this time and with all those who mourn.

[The biographical information above is taken from the introduction to the Festschrift in Honour of Rabbi Harry Jacobi MBE, written by his granddaughter Abigail Jacobi, and Harry’s own writings.]

Click here to view photos of Rabbi Harry and read tributes shared by those who knew him.