Many from Liberal Judaism and beyond have shared their memories of Rabbi Harry Jacobi z”l, some of which have been collected below.

If you’d like to submit your memories of Rabbi Harry please email pr@liberaljudaism.org.

“I will always remember Harry as my teacher, friend & colleague. Since my teenage years, Harry was for me, what being a Liberal Rabbi was all about. Harry’s spiritual presence has been, and remains a towering one for his family, his communities and the Liberal Jewish movement.”
– Rabbi Danny Rich, Liberal Judaism

“Rabbi Jacobi was the archetypal mensch – he conveyed a real generosity of spirit both on a personal level and in his commitment to justice and fairness to today’s refugees, never forgetting his own refugee past.”
– Dr Edie Friedman, Jewish Council for Racial Equality

“I met Rabbi Harry Jacobi z”l this past June at my first LJ Biennial. I never had the chance to get to know him personally, but was inspired as I learned more about his life and work. During LJ Kallah in December, he and I teamed up to read Torah: the youngest and oldest members of Conference. I might be smiling in this picture, but was almost moved to tears in the moment. I wish I’d had the chance to learn more from him, but I’m lucky to count myself among those who will be guided by his lasting legacy.”
– Cantor Tamara Wolfson 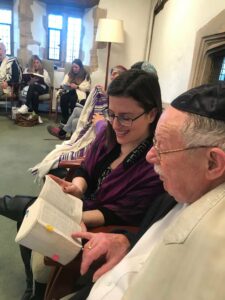 “We are deeply saddened at the passing of Rabbi Harry Jacobi, who was a stalwart AJR member. Harry will be remembered with great fondness for his thoughtful sermons at memorial services and as a passionate educator about the Kindertransport and the Holocaust.
– Michael Newman, Association of Jewish Refugees

“I know that I am an Orthodox Rabbi in the United Synagogue and Harry worked in the Liberal Movement, differences that cannot be wished away. But I had the honour of getting to know him over the past few years. What a special man he was who stood up for justice, fairness and compassion… ideals we should all reflect on. He will be sorely missed.”
– Rabbi David Mason, United Synagogue

“Rabbi Jacobi was and remained until his death, a passionate campaigner on behalf of refugees. He epitomised the support that the Jewish community has given to the cause of refugees, especially child refugees. He was an exceptional person, a stalwart guy, and had real determination and energy.”
– Lord Dubs
Click here to read the full tribute by Lord Dubs in the Jewish News.

“The outpouring of sadness at the death of and tributes to Rabbi Harry Jacobi z”l tells you so much about this remarkable man. I only knew him in his older years, when he was a “legend in his lifetime”, but will never forget his poise, kindness and wisdom.”
– Robin Moss, Liberal Judaism Officer

“We are very sorry to hear of the passing of Kindertransport refugee Rabbi Harry Jacobi. Rabbi Jacobi has spent much of his career working hard to educate about the Holocaust, sharing his experience as a refugee with others, including speaking to schools. He will be sadly missed.”
– Karen Pollock MBE, Holocaust Education Trust

“He stood with us every step of the way in seeking justice & sanctuary for young refugees”
– Benita Wishart, Citizens UK Birmingham

“I knew Harry Jacobi and liked him very much for well over 60 years. I was a small child being brought up in Aberdeen, Scotland when Harry spent time there in the early 1950’s as a student rabbi. He and his wife were lifelong friends of my late parents, Philip and Sarah Orkin. In all the time I knew Harry he was always kind and gentle, with a smile on his face. He never seemed to have a cross word for anyone. My family and I will miss him. (I have provided a photo from the mid 1950’s with Harry and his wife Rose, and me in the front aged 7).”
– Martin Orkin 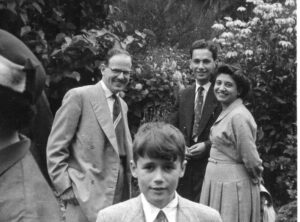 “We’re deeply saddened to hear of Rabbi Harry Jacobi’s passing at the age of 93. But we’re so thankful for all his hard work campaigning with us and fighting for the safe passage of refugees, just like he was given 80 years ago on the Kindertransport. He joined Lord Dubs on a visit to Calais to meet young child refugees seeking sanctuary in Britain just like he was given. I remember the children in Calais he met couldn’t quite believe what they were hearing when Harry & Alf explained that they were both ‘refugee children too’. Last year we were honoured to join him at a Kindertransport commemoration where 1,000 people stood in support of child refugees. What an inspirational and incredible man. The warmest of wishes to his family.”
– Laura Griffiths, Safe Passage International

“Harry Jacobi has been in my life for all of my life and his life and vision and kindness, guided and inspired me, and I admired him more than any living person I know. I will miss him deeply.”
– Gillian Stern

“Harry had an extraordinary presence at Jewish Child’s Day meetings – his quiet wisdom and thoughtful, measured opinions were very valuable. He will be sorely missed. Our thoughts are with his family at this time.”
– Jewish Child’s Day

“Rabbi Harry Jacobi MBE, Z”L, a child of the Kindertransport, put the practice of justice, equality, inclusion & peace at the heart of his Rabbinate. We feel blessed to have experienced his warmth & wisdom.”
– Rabbi Elli Tikvah Sarah, Liberal Judaism

“Very sad to hear the news of Rabbi Harry Jacobi z”l. His Kindertransport refugee story was powerful and he was a colossal force for tolerance and inclusivity. A wonderful person.”
– Paul Anticoni, World Jewish Relief

“So sad to hear of the death of Rabbi Harry Jacobi, who fought for safe passage for child refugees, in the spirit of the Kindertransport that brought him to the UK as a child himself. Thinking of all who knew and loved him.”
– Hannah Gretton, Citizens UK organiser

“Many of our members at Mosaic Liberal Synagogue (formerly Harrow and Wembley Progressive Synagogue) remember Harry with much fondness as he (with Rose’s involvement and support) served the community from 1975-1982. May the memory of Harry always be a blessing and source of love and strength to his dear family. May his great resilience and enduring Liberal Jewish faith be an example to us all.”
– Rabbi Dr Frank Dabba Smith

“RIP rabbi Harry Jacobi who survived the Holocaust and worked tirelessly to campaign for the rights of child refugees today. The world needs more people like him.”
– Alice Owen, British Red Cross

“Rabbi Harry Jacobi will be remembered as a wise, resilient and gentle figure and an outstanding Jewish leader. His passing is particularly poignant as he is one of the last of his generation to have escaped the horrors of the Holocaust; his bar mitzvah taking place only days before Kristallnacht. He was a wonderful father to his rabbinic family of Margaret, Richard and the late David z”l and ever-loving husband to Rose z”l. May his memory be a blessing.”
– Rabbi Laura Janner Klausner, Reform Judaism

“Baruch Dayan Emet. A truly committed free thinker and mensch. An inspiration. Harry was a passionate champion of reconciliation and peace, held fast to his faith and worked tirelessly for refugees and asylum seekers… his own formative experiences always at the core. A great rabbi and friend to all at South Bucks Jewish Community.”
– Anita Epstein

“I got to know Harry when I was a Deputy (Board of Deputies) for NPLS. He amazed me, for a man if his years he stood, in all weathers, by the Cenotaph in London during the annual AJEX parade. Standing there all that time was not enough for Harry, at the end of the parade he would walk up to a position opposite Horse Guards Parade and honour those in the parade, and it was there I first met him. It was a great honour for me to meet him and shake his hand when I met him at NPLS and other places he visited. He will be sadly missed.”
– David Simmons

“Harry helped me teach at Limmud before I started rabbinical school. What a lovely man.”
– Rabbi Jordan Helfman, World Union of Progressive Judaism

“Harry was a passionate champion for refugees and asylum seekers… based on his faith and his own formative experiences. A great friend to all our family.”
– Tony Samuel

“Probably the kindest, most gentle, honest person i have ever had the privilege to meet. He will be deeply missed.”
– Elaine Abrahams

“Baruch Dayan Emet. So sorry to hear of this news. What a wonderful man. Wish I had had a chance to learn more from him.”
– Rabbi Haim Shalom

“An extraordinary and inspirational man. He will be missed by so many.”
– Sara Alston