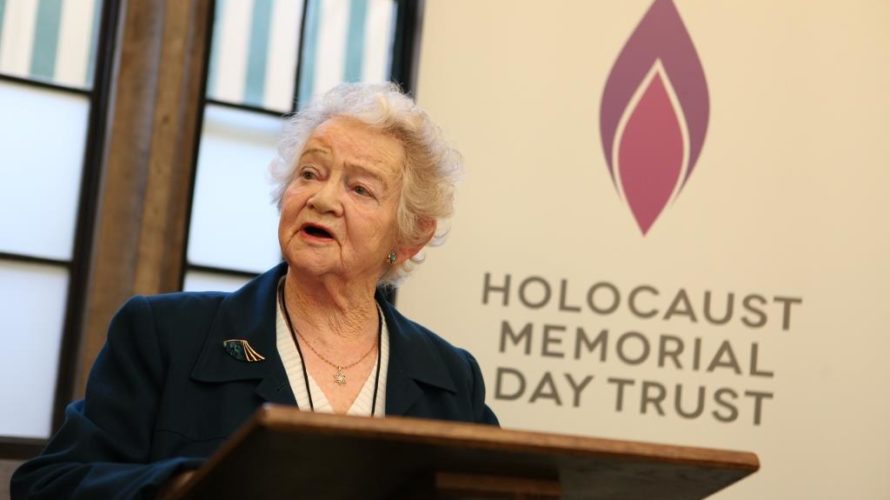 Bob and Ann Kirk of The Liberal Jewish Synagogue (LJS), Mosaic Liberal Synagogue member George Vulkan, and Walter Kammerling from Wessex Liberal Jewish Communtiy were recognised for their contribution to Holocaust education and remembrance in the UK.

All four escaped the Nazis as children and today dedicate a large portion of their time to educating school pupils and others about the dangers of antisemitism, racism and prejudice.

Ann (pictured above) met Bob at a club for young Jewish refugees, run by Woburn House. They married in 1950 and are now proud parents, grandparents and great-grandparents. Last August, they celebrated Ann’s 90th birthday with a special Shabbat service at the LJS.

You can read Bob’s story here.

You can read Ann’s story here.

George was born in Vienna in 1929. He fled Austria as a child along with his parents, uncle and three cousins with just a suitcase and a teddy bear. They first went to France and then Britain although his uncle returned to Vienna, in the hope that his WW1 bravery medal would protect him, but was murdered by the Nazis.

Walter also arrived in the UK on the Kindertransport after Kristallnacht, aged 15. On arriving he was sent to a refugee camp for children in Essex and later worked on a farm in Northern Ireland. His sister and parents perished at Auschwitz-Birkenau. In another similarity to the Kirks, Walter met his wife, another Kindertransport refugee, in London several years after they both arrived in England.

Click here to listen to Walter tell his story.

All four honourees work tirelessly to raise awareness of the Holocaust, as speakers for organisations including the Holocaust Educational Trust and Holocaust Memorial Day Trust. Along with other survivors, it is estimated they have shared their testimony with more than 100,000 school children around the UK.

Holocaust Memorial Day Trust chief executive Olivia Marks-Woldman said: “We are privileged to work with survivors of the Holocaust who give so much of their time to speak in memory of the millions of people who were murdered.

“It is wonderful to see their impact celebrated with these honours, representing recognition from the highest levels of our society.”