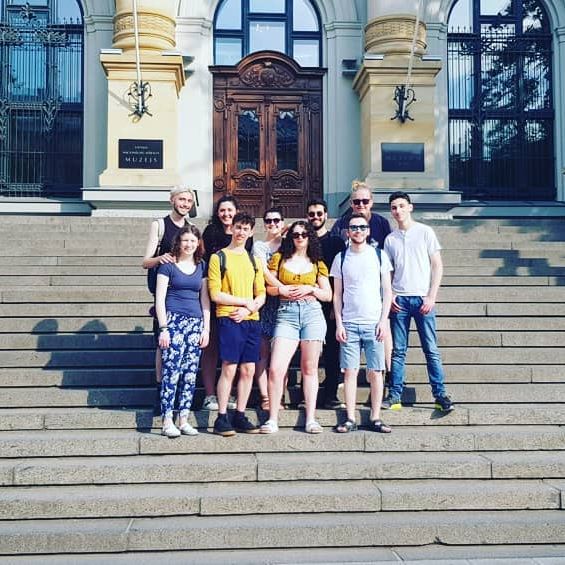 It is quite hard to put into words the experience that was had by the 12 LJY-Netzer Bogrimot (participants) who ventured from the UK to Riga and Vilna this summer.

Although many of us have had extensive engagement with the history of the Holocaust throughout our lives, nothing could quite prepare us for what we learned.

We learned about the shootings of whole communities and visited their mass graves. We heard the testimony of a child who hid under the dead bodies of their family members for 17 hours and we were told about the burning of all the synagogues with people still inside. We saw the remnants of the charred Torah scrolls and the art of a young person trapped in a ghetto and smuggled out in a sack.

We also learned about the near millennium of Yiddish culture annihilated over a mere six years. The once proud shtetlekh are now towns which have no trace of Jews ever having been there. It was hard to comprehend how rabbis who were changing the face of Jewish text study were tormented, tortured and then murdered. Or how the scholars of the community, who were attending universities and bringing secular thought to our Jewish tradition, were also killed.

We said kaddish for our ancestors and remembered them as the great artists, dancers, shopkeepers, intellects and homemakers that they were.

But we also learned about the use of art-nouveau architecture as an architecture of resistance by occupied nations, and the rise of Jewish nationalism through ideologies such as Zionism and Bundism.

We read stories of Lithuanians and Latvians hiding Jewish children and then raising them as their own after the war.

We also had time to bond as a group as we paddled in rivers and swam in seas. We ate food together and stayed up late playing games and talking. We studied Talmud in the city in which it was first printed and learned about the rabbis who were debating it in the 18th century.

Throughout the trip, we mourned what was lost. A thriving Jewish culture that had revolutions of thought, politics and study. Movements to embrace the nationhood of the Jewish people and beautiful synagogues where people gathered to pray and do business.

We will forever be mourning the loss of what once was… and what could have been. But we will also continue to be a generation of young Jews who retain our faith, our culture and a fierce determination to honour the memories of our murdered ancestors. We will remember them forever. May their memories forever be a blessing.