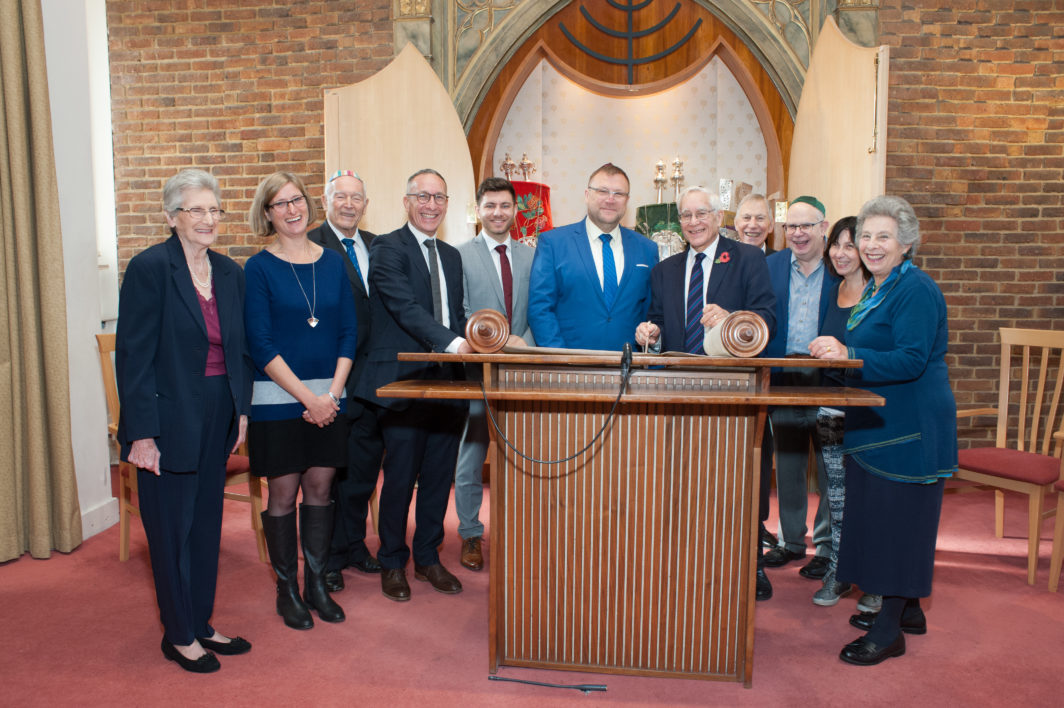 Northwood & Pinner Liberal Synagogue (NPLS) welcomed Slovakian Ambassador Ľubomír Rehák and press attaché Milan Matlovic to the synagogue for a special event based around the community’s Torah Scroll from the country.

NPLS have a Scroll from Spišská Nová Ves, in the east of Slovakia, which survived the Holocaust in a hidden compartment of a wardrobe. They have spent the last two decades studying the Jewish community that once lived there.

Cynthia Drapkin, one of the leaders of the research, took the Ambassador through the project’s findings and the NPLS archive, before the synagogue’s Senior Rabbi Aaron Goldstein and Emeritus Rabbi Dr Andrew Goldstein showed him into the sanctuary to view the Torah.

The rabbis explained that as part of the bar and bat mitzvah process at NPLS, young people learn about Northwood’s Scrolls and the places where they came from. Many choose to read from the one from Spišská Nová Ves during their ceremony, as they are fascinated by its story.

He said: “The fact that this Torah Scroll of the extinct Jewish community from Spišská Nová Ves in Slovakia continue to be used for prayers in London is important not only for Jewish religious life and the memory of the tragic fate of Slovak Jews, but also serves as an inspiration and an encouragement for people-to-people contacts, cooperation and spiritual unity between our countries.”

Various visits to Spišská Nová Ves by NPLS members have led to wonderful relationships being formed with the locals there and especially the gymnasium (high school) across the road from where the synagogue once stood. Pupils now tend the Jewish cemetery and continue researching the history of the Jews of their town.

Cynthia said: “The Ambassador’s visit brought honour to both our synagogue and the Slovak town of Spišská Nová Ves. It strengthened the connection between the two and acknowledged the almost 20 years’ work, in both places, to research and remember this former Jewish community; and it gave formal recognition to the proposed memorial which we hope, with the Ambassador’s support, to have erected in the town.”

At the end of the visit Rabbi Dr Andrew Goldstein presented the Ambassador with a gift of a book about Slovak synagogues by Maroš Borsky, with two catalogues from recent exhibitions in the Bratislava synagogue. The Ambassador kindly presented gifts to the synagogue and to Cynthia Drapkin.

Andrew, who is also president of Liberal Judaism, said: “The work of Cynthia and those around her exemplifies our duty to remember those who once read from our Torah Scroll. Educating local people about why they have no Jewish neighbours today, insures this will not happen again to others tomorrow.”