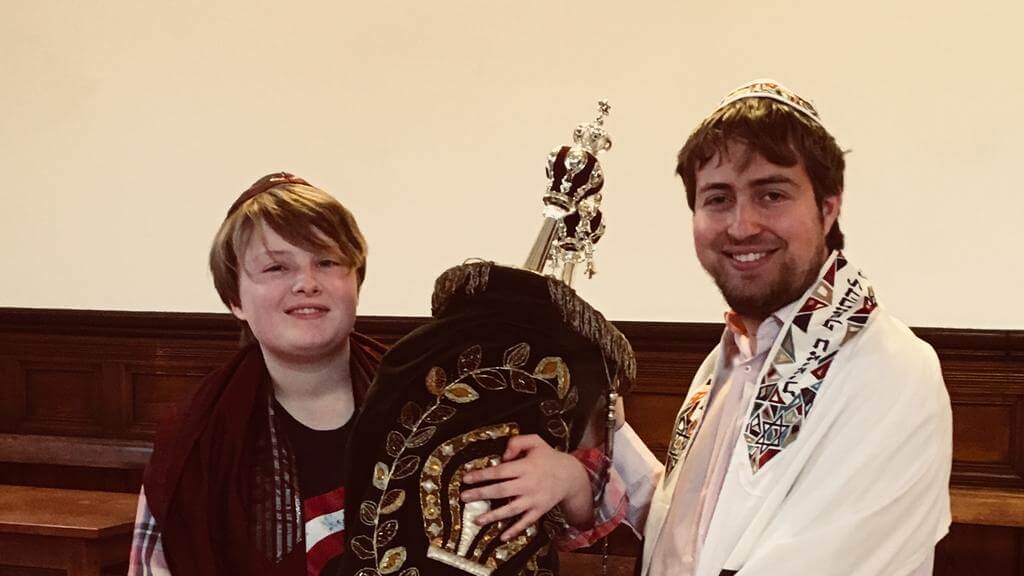 We live in Otterburn, Northumberland and the [gender-neutral] bnei mitzvah took place at York Liberal Jewish Community, at the Quaker Meeting House. It was such a big day, not just for us but also for our community. When Esther read the Torah portion, I felt incredibly proud. Esther had done so much learning on their own [Esther prefers to be referred to as “they”]. We had Skype lessons from our student rabbi Gabriel Webber and also from Hava Fleming (our adopted extra grandmother) but there was still a lot for Esther to do. Hava is a long-term friend from shul. She is wise and generous and loves the children (we have seven) and they love her. She lives more than an hour’s drive away but still visits. She has taught most of us Hebrew, takes us on dog walks and generally stands up for us. In return we tell her terrible jokes. Our “real” family are sadly passed or live a very long way away.

Our community meets only once a month, so there is not a lot of opportunity for weekly learning. Instead, we have a fantastic network of support — people who are ready to give their time and energy to help one another. They feel like a family and really came through for the simchah — a huge shared meal with hundreds of doughnuts (it was Chanukah), delicious vegetarian food for everyone, popcorn machines and even an ice-cream station. Food was buffet style and it was lovely to see everyone mingling and talking.

As this was the first bnei mitzvah for our community and the first in York for at least 50 years, Esther had to cope not only with the learning and the stress of leading a service but also with media and publicity work. I was so proud of the way they handled themselves — not sure I could have done it at that age. So, our day started at 7.30, slipping over the icy pavements in York to get the BBC Radio station for Esther to be interviewed. Then straight to the Meeting House.

The service was wonderful. Esther was calm and confident and their d’var Torah was incredibly articulate and mature. Reading from Miketz, Esther talked about the importance of having dreams, not just for ourselves but for the whole world. So much joy and happiness! Mostly I remember sitting in front of our wonderful community — with whom we’ve shared so much — seeing how many people were there to support another Jewish child into adulthood and listening to them tell us what being Jewish meant for them. And crying. A lot.