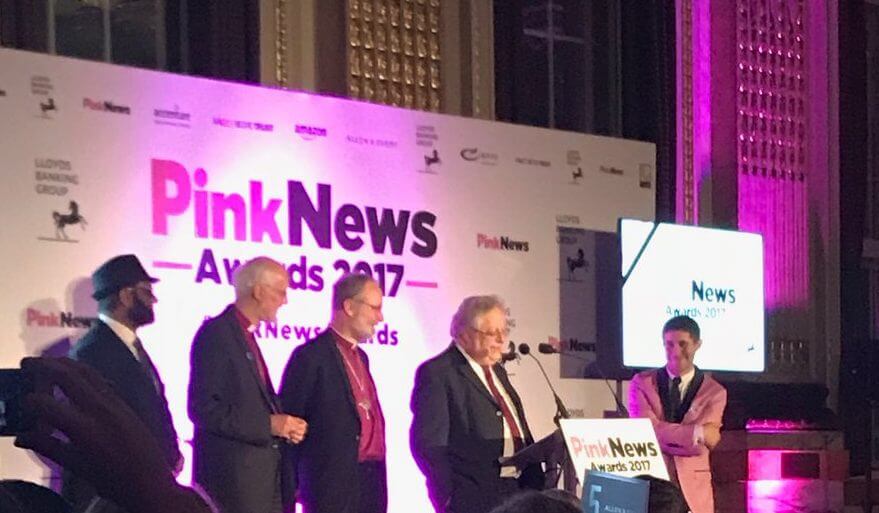 The event, which took place in Westminster, celebrates the contributions of politicians, entertainers, businesses, campaigners and community groups to improving LGBTQI+ life in the UK and beyond.

Doctor Who’s Pearl Mackie, the cast of Coronation Street and Lorraine Kelly were among the winners on the night.

Danny was joined by other religious leaders on stage as he gave his address at the start of the evening. You can read his words in full below:

An incident occurred in which Rabbi Elazar, son of Rabbi Shimon, came from Migdal Gedor, from his rabbi’s house, and he was riding on a donkey and strolling on the bank of a river. And he was very happy, and his head was swollen with pride because he had studied much Torah.

He walked behind the man, trying to appease him, until they reached rabbi Elazar’s city. The people of his city came out to greet him, saying to him ‘Greetings to you, my rabbi, my rabbi, my teacher, my teacher.’ The man said to them, ‘Who are you calling my rabbi, my rabbi?’ They said to him, ‘To this man, who is walking behind you.’ He said to them, ‘If this man is a rabbi, may there not be many like him among the Jewish people.’ They asked him, ‘For what reason do you say this?’ He said to them, ‘He did such and such to me’. They said to him, ‘Even so, forgive him, as he is a great Torah scholar’.

He said to them, ‘For your sakes, I forgive him, provided that he accepts upon himself not to become accustomed to behave like this’. Immediately Rabbi Elazar, son of Rabbi Shimon, entered the study hall and taught, ‘A person should always be soft like a read and he should not be stiff as a cedar, as one who is proud like a cedar is likely to sin.’ (Babylonian Talmud: Ta’anit 20b)