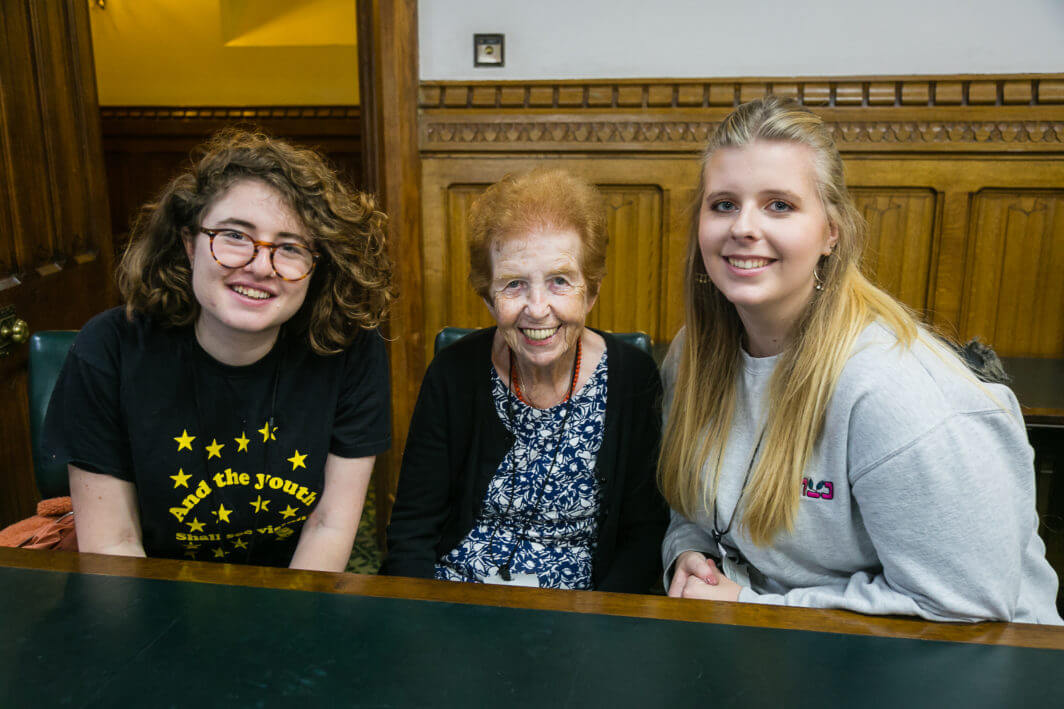 A number of prominent members of Liberal Judaism took part in an intergenerational tea party with Holocaust survivors, MPs and Peers, held at the Houses of Parliament, to launch Mitzvah Day 2017.

LJY-Netzer movement workers Ellie Lawson and Hannah Stephenson (pictured above with Holocaust survivor Eve Kugler) and LJ Today editor Simon Rothstein were part of the event, along with Gillian Merron – the chief executive of the Board of Deputies of British Jews and a member of Lincolnshire Jewish Community.

They were joined by 22 MPs and Peers to mark the start of the month leading up to Mitzvah Day, the UK’s biggest faith-based day of social action.

Gillian said: “This launch event celebrated the very best of Jewish, interfaith and intergenerational social action, as well as our commitment to remember the past. It is a tribute to the importance of these goals that so many of our friends in Parliament came to support us.”

Hannah added: “Spending time with Holocaust survivors was a truly moving experience. So many young people of all faiths, and none, are keen to make the world a better place and I think you will see more young people than ever take part in Mitzvah Day in 2017.”

Mitzvah Day takes place on, and around, Sunday November 19 and has a theme based around the Jewish value of L’Dor Vador: From Generation to Generation. To find out more, and to get involved, please visit www.mitzvahday.org.uk

Laura Marks OBE, the founder and chair of Mitzvah Day, said: “Mitzvah Day is all about people giving their time, rather than their money, to make a difference to the community around them.

“A big part of that is spending time with older people – who can often feel lonely or isolated – and that is what we wanted to achieve here today. You could not only see how much the Holocaust survivors enjoyed spending time in the House of Commons, but how rewarding the MPs found the day too.”

The event was run in partnership with the Board of Deputies of British Jews and the All Party Parliamentary Group on British Jews.