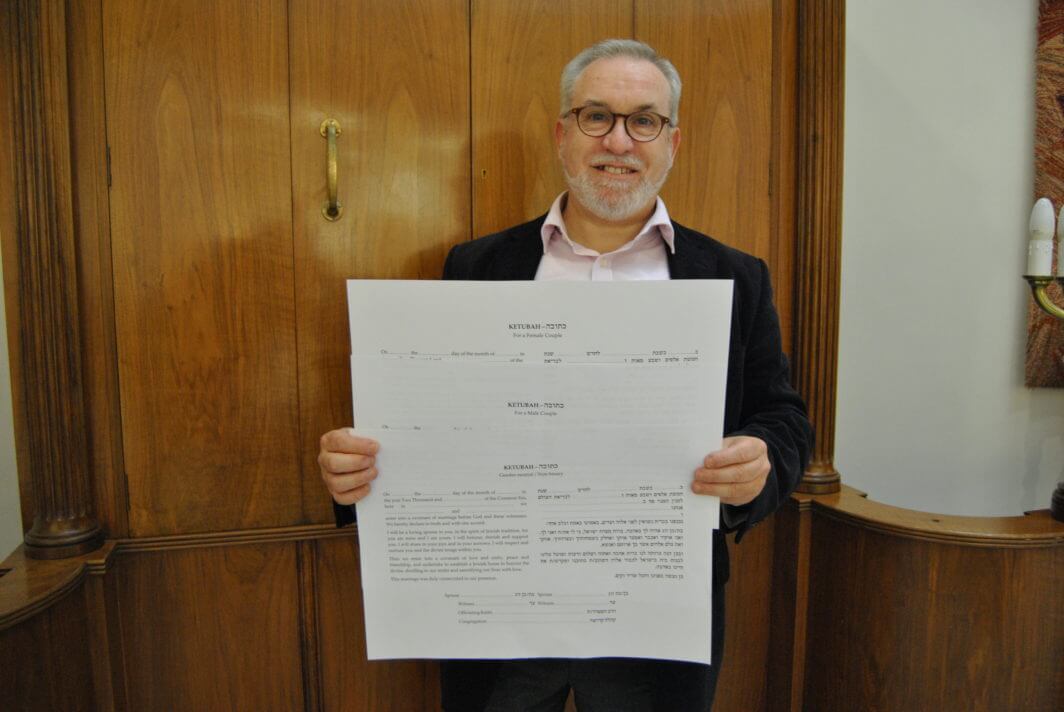 Monday September 25 – Liberal Judaism has become the first Jewish movement in the world to offer ketubot especially written for same sex couples and those who prefer a non binary or gender neutral format.

A ketubah, or marriage contract, has been a key part of a Jewish wedding ceremony for centuries. It outlines how the couple will support each other and the home they are establishing.

In the past, ketubot have referred to ‘bride’ and ‘groom’ and used gendered language throughout, meaning they are not suitable for many of today’s weddings.

Liberal Judaism’s Rabbinic Conference has therefore approved three new sets of wording – which it will offer alongside the traditional Liberal ketubah – covering same-sex male and same-sex female marriages, and those who wish for a gender neutral/non binary ketubah.

The gender neutral ketubah will also appeal to couples seeking a truly egalitarian ceremony, regardless of their own gender or sexuality.

They are a continuation of Liberal Judaism’s ground-breaking Covenant of Love: Service of Commitment for Same-Sex Couples, which Mark edited in 2005 to coincide with the introduction of civil partnerships in Britain, but long before equal marriage became law.

Mark (pictured) said: “It is important to have ketubot for same-sex marriages, and for gender inclusive or non-binary couples, as Liberal Judaism continues to develop Judaism in the most helpful, sensitive, compassionate and forward-thinking way for the needs of our time.

“LGBTQI+ members are increasingly forming an important part of our communities, and many will want to get married and bring holiness and spirituality into the important events of their lives.

“These ketubot show that they are accepted and recognised fully for who and what they are, and don’t have to squeeze themselves into some other formula that isn’t appropriate.”

“On a wider symbolic level, we are also showing the world that Liberal Judaism stands for certain values and for the greatest possible inclusion and acceptance of diversity.”

Mark added: “As a movement we long campaigned for equal marriage and, through projects such as Twilight People, we have now taken the lead on gender issues within the Jewish and faith communities.

“Having these ketubot is a signal that we are doing something very practical and real to help couples who want to bring together Jewish tradition and modern liberal values on gender and sexuality.”

The ketubot were formally accepted by Liberal Judaism’s Rabbinic Conference at its most recent meeting and therefore now form part of the movement’s official policy.

Rabbi Aaron Goldstein, chair of Rabbinic Conference, said: “As Jews around the world come together for our High Holy Days, these ketubot demonstrate Liberal Judaism at the cutting edge of Judaism, and indeed of religion and society.

“Our goal is that innovation and inclusivity should not be radical, but the natural evolution of Judaism’s centuries old tradition.”

Liberal Judaism’s senior rabbi, Rabbi Danny Rich, added: “This once again demonstrates that Liberal Judaism not only leads the campaign for inclusion but seeks to offer it equality of opportunity in all of its materials.”

To find out more on these new ketubot, and how to get one for your wedding, please contact the Liberal Judaism office on montagu@liberaljudaism.org.