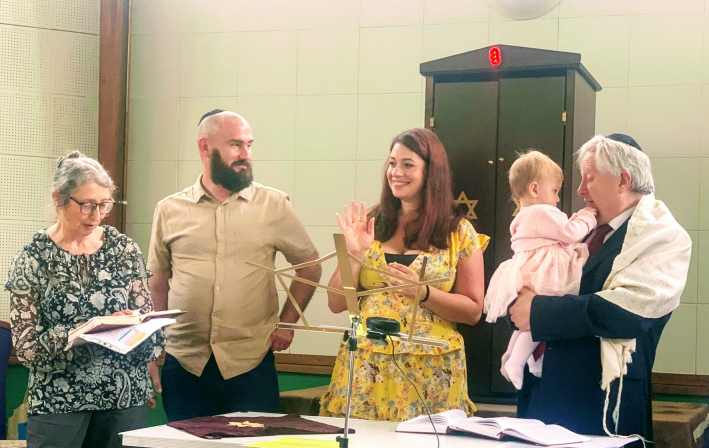 A special service to celebrate Liberal Judaism’s 120th anniversary, it is open to all to attend in person or watch via Zoom. For address details or the Zoom link, please email office@stevenageliberalsynagogue.org.uk or call 01438 300 222. The service begins at 11am and will be followed by a kiddush.

The Open House Shabbat initiative will see each Liberal Judaism congregation hold at least one Shabbat during the year, for which they will open their doors – whether in-person, online or both – to the rest of the Liberal Jewish world and beyond.

We were helped in our formative years by Liberal Judaism, and in particular Rabbi Danny Rich (pictured above leading a baby blessing) and Rabbi Pete Tobias. We have subsequently enjoyed services led by many wonderful Liberal rabbis.

Many of our first members were delighted to finally have a shul serving Stevenage and the adjoining areas of Hitchin and Letchworth. Being a small community has several advantages, one being the camaraderie that develops. One new member said they had gained 50 new friends!

Being the only synagogue in Stevenage, we work with Stevenage Borough Council with their commemoration of Holocaust Memorial Day and the Mayor of Stevenage visits a service at least once each year. Two of our members visit local schools and talk to the children about Judaism.

We are proud to be part of Liberal Judaism and look forward to our Open House Shabbat service as our small contribution to the 120th anniversary celebrations.