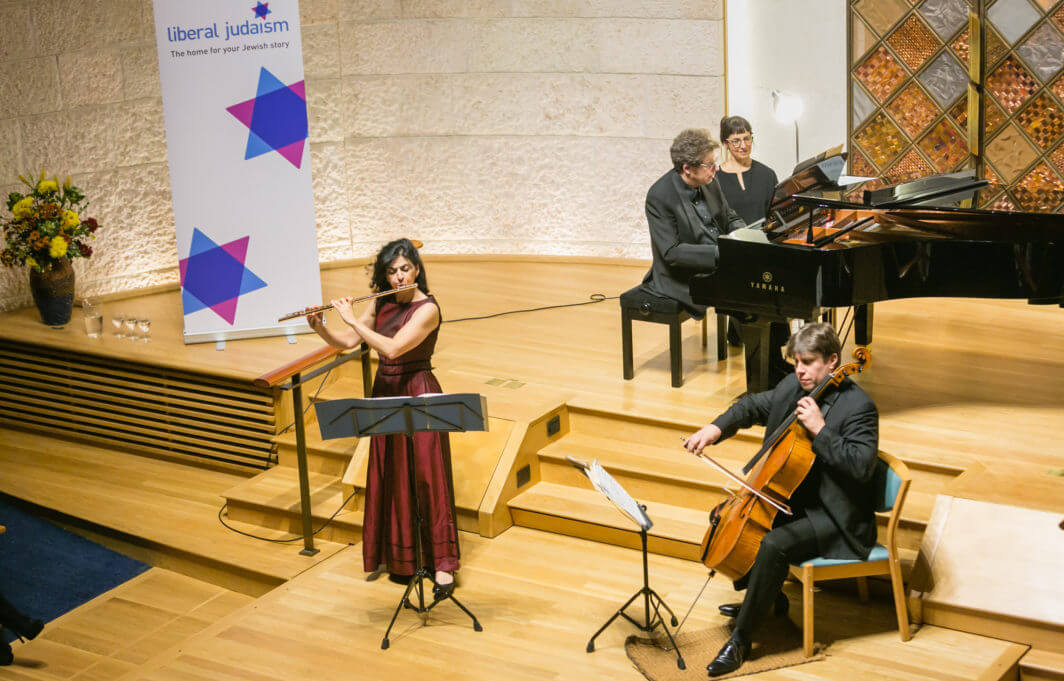 Liberal Judaism raised £12,000 at a special fundraising concert, the first time such an event has been held in the movement’s 115 year history.

The event saw world-renowned musicians David Dolan, Abigail Dolan and Thomas Carroll receive a standing ovation for their programme of classical music and improvisation. It also included a champagne reception, raffle and silent auction, for which bidding is still ongoing.

As well as ticket sales and donations on the night, a high number of guests also signed up as ‘Friends of Liberal Judaism’, a brand new scheme where people can commit to a small monthly direct debit to suit their budget.

The new fundraising scheme is centred around the theme ‘a home for your Jewish story’, symbolising the central role Liberal Judaism has played in so many people’s lives and how the movement is a home for all who identify as Jewish – welcoming those of all backgrounds, gender, sexuality and traditions.

Rabbi Charley Baginsky, Liberal Judaism’s director of strategy and partnerships, hailed the concert as showing a shift in how the movement raises money, in order to safeguard its future and help more people find a home for their own Jewish story.

She said: “While many other charities have made huge inroads in the field of fundraising, we are taking the first steps towards a new culture within Liberal Judaism. For many years now we have relied on our loyal Patrons and on the contributions we receive from our constituent congregations. A great thanks must be given to them.

“During our 115 year history we have achieved great things, and in recent history under the leadership of Rabbi Danny Rich we have grown our communities and increased our presence in the Jewish and external world.

“However we are ambitious; there is more we believe we can be doing, more we should be doing, to ensure that not only does Liberal Judaism live up to its central ethic of being a vibrant, cutting edge and inclusive movement – but that we can truly be a home for everyone’s Jewish story. But in order to achieve these ambitions we need your support.”

The concert was held at The Liberal Jewish Synagogue, with more than 120 people in attendance including Liberal Judaism’s senior rabbi, chair, and president – Rabbi Danny Rich, Simon Benscher and Rabbi Dr Andrew Goldstein – Board of Deputies chief executive Gillian Merron and rabbis and officers from Liberal and Reform communities all over the UK.

Pianist David Dolan, a member of Finchley Progressive Synagogue, told the audience how the concert was especially meaningful to him and wife Abigail, a flautist, as they found their Jewish home within Liberal Judaism after moving to the UK from Israel.

Along with cellist and close friend Thomas Carroll, they devised and performed ‘Beyond Text: Interpretation as Meaning’; taking risks and deviating from expectations in a prodigious performance that included work by Bach, Debussy, Schumann, Hayden and Weber.

For those who missed the concert, but still want to donate to Liberal Judaism, there are many options available.

Bidding on silent auction items – which include a private piano lesson with David Dolan, a trip for up to four people to London or Whipsnade Zoo with Rabbi Danny Rich, a week in a beautiful Cornwall cottage and unique artwork, jewellery and experiences – is still open at https://www.jumblebee.co.uk/liberaljudaismfundraisingauction2017

Supporters are also encouraged to sign up for Liberal Judaism’s Patron and Friend schemes.

Rabbi Danny Rich said: “This event was held on the anniversary of the first meeting of our movement, in 1902 in the home of Isadore Spielmann. I am confident that another 115 years will see us continue to achieve great things. I invite you to come and be a part of it.”

To find out more about becoming a Friend or Patron of Liberal Judaism, please contact Tom Rich on t.rich@liberaljudaism.org.uk