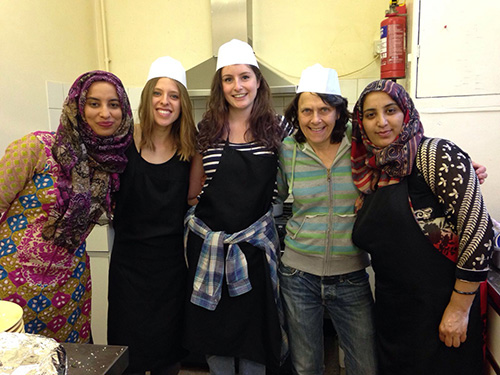 The unique project – a collaboration between Nottingham Liberal Synagogue (NLS) and Muslim charity Himmah – provides a hot meal every Wednesday to around 100 people in need in Hyson Green, a deprived area of Nottingham.

As well as helping those in need, the SaSh Kitchen has played a key role in bringing Nottingham’s Jewish and Muslim communities together.

Members of NLS, including Rabbi Tanya Sakhnovich, were interviewed by Notts TV at the celebration.

Click here to watch the interview
NLS member Karen Worth said: “I have been privileged to be involved in Salaam Shalom Kitchen since its inception and have made friends with many Muslims through the project, as we work together with a common aim. I believe we have made a real, albeit small, difference to breaking down barriers between people.

“The guests we serve come from many places and circumstances and the atmosphere that is created is both safe and welcoming. The kitchen provides not only a hot meal but company, interaction and community. This is really significant for people who are often excluded and outside.”