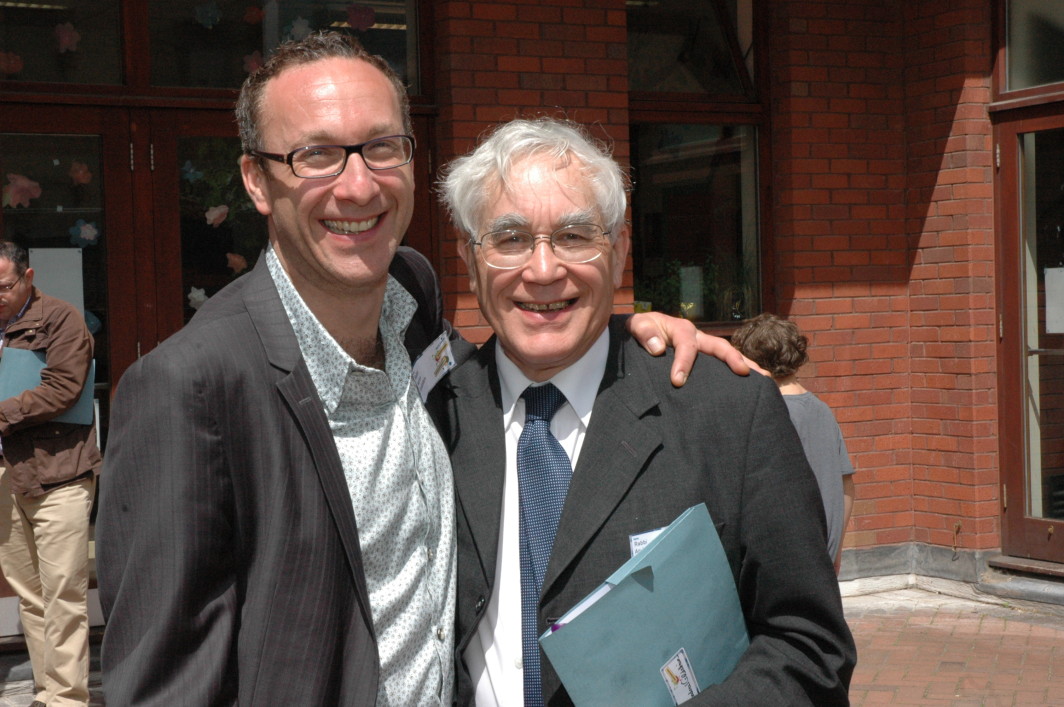 Rabbi Dr Andrew Goldstein and his son Rabbi Aaron Goldstein feature in a Father’s Day piece which talks to three families where children have followed their fathers into the pulpit and become rabbis – the other families featured are; Rabbi Yisroel Binstock & Dayan Ivan Binstock and Rabbi Miriam Berger & Rabbi Tony Bayfield.

When he first left university, Aaron Goldstein, now 43, says he didn’t feel “mature enough to be a rabbi” and put his ambition on hold for a career with British Steel.

“Because of my dad, I was always involved in the Jewish community, and I wanted to be a rabbi.

“But, part of the reason I went off to work for British Steel is because I didn’t feel ready.

“I didn’t have any respect for myself yet, let alone expect other people to respect me as their rabbi.

“And part of me, although it is a little ironic now, wanted to work for a great British industry that would always be around.”

“Having said that, I loved growing up in a rabbinic household and it certainly inspired me.

“I saw my dad lead his community and have so much fun. And I always felt if you can have that much fun and be a rabbi why wouldn’t you want to be one?

“I don’t think I became one because I had some deep spiritual calling. I just loved the sense of community and the atmosphere of going to shul. Norwood and Pinner Liberal Synagogue was my home and I wanted that for my own children.” He has two daughters, Liora 13 and Shaya, 10.

“When my father left the synagogue, it was important for the community to detach from my parents. My dad and mum were a very traditional rabbi and rebbetzen and it is different for me. My wife has a full-time job and her own company. So the community needed to get used to coming to me.’

“But now I love having my mum and dad in shul with me, and if I’m giving a sermon I can’t help look for their nod of approval.”

He adds: “I often find myself thinking Dad did a lot more and why can’t I be like that?

“But I remember playing Sunday league football and he would only be able to come to one or two games, because he was so busy.

“I wanted to be more present for my children, so you have to find a balance that works for you.”

Rabbi Dr Andrew Goldstein, 70, was so conscious of the pressure on his son to live up to his reputation, that he left the country and didn’t enter the synagogue for six months after Aaron was ordained.

He says: “It was difficult with me as an emeritus rabbi who was still around, because I was very conscious of the need to keep out of things.

“We wanted to make it very clear that he was now the rabbi and I’m not.

“He also needed the space to develop his own style and establish himself.

“But now every Shabbos, if I’m not doing anything I go and sit in the congregation. People say to him: ‘You are just like your dad’ – which I think is terrible.

“He is much better at the pastoral care than I was, and he does a lot more visiting people.

“Being a rabbi didn’t run in the family, although I was very involved in my synagogue youth club. I was at university studying science when I decided to become a rabbi.

“I finished my degree in Botany and Zoology and, in 1965, I went to the Leo Baeck College, where I finished in 1970, and then went straight into being the rabbi for NPLS. We had 30 or 40 families to start and when I left we had more than 800.

“My family grew up in the congregation.”

Rabbi Goldstein, who founded and with his wife ran the Liberal Jewish Kadimah Summer School for 19 years, adds: “I remember Aaron was working in Cardiff, for British Steel as a senior manager and he came to me and said: ‘Dad, I have something to tell you. I decided I’m going to do it.’ ”

“It wasn’t a surprise at all, and actually, it was good for him because he had developed skills in management that I never had, because I went straight into the rabbinate from school and for me it has been my life”

“I was aware for a long time that Aaron was living life as my son, but increasingly now, it is me who has become known as his dad.”