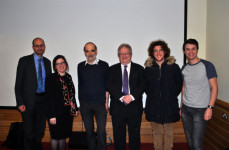 Liberal Judaism’s senior rabbi, Rabbi Danny Rich, has told how “Liberal Judaism is a post or non-Halachic expression of Judaism.”

Speaking at the annual Oxford University JSoc Intrafaith Conference, Danny was addressing the topic ‘why and how is Halacha relevant nowadays and how and why does Halacha change?’

Danny explained: “What seems to me to underpin Halacha, and indeed traditional Judaism as a whole, is a concept inimical to Liberal Judaism.

“Whilst I appreciate the nuances and subtleties, the idea that the Torah was given directly by God and recorded accurately by Moses – who by Divine miracle contributed its transmission through the generations – is simply untenable for a Liberal Jew.

He continued: “I could add – and I have not yet commented on the issue of gender – that, even were I to ignore its underlying assumptions, there is much in Halacha which it is impossible to keep, and much that a Liberal Jew would not want to observe in any case.

“I give just the example of the mitzvot concerning the Temple. Even if the politics of the Middle East were transformed – and even were we in a Messianic time – Liberal Judaism is clear that the Temple should not be rebuilt; its Halacha is redundant for ever, and the institution of the synagogue has enhanced and civilised Judaism in a manner in which the idea, never mind the practices, of the Temple cannot supersede.”

Speaking to around 50 Oxford University students and members of the local Oxford Jewish Community, Danny concluded: “Halacha as taught and practised is, in my view, pre-Emancipation and, in forging a Liberal Judaism for the 21st century, we shall, and I quote John Rayner, ‘…seek a form of Judaism that preserves all that remains valid of the various past phases of our heritage but without dragging along the baggage of discredited beliefs and antiquated practices’.

“With respect, I place Halacha in the category of ‘discredited beliefs and antiquated practices’, and thus I describe Liberal Judaism as non- or post-Halachic.”

Following his talk, Danny took part in an hour-long Q&A and debate with the other panellists at this unique Intrafaith event, featuring senior figures from both Orthodox and Progressive Judaism sharing a platform.