She was ordained in 1983 at Leo Baeck College, London, and was the first woman from the continent to be ordained after Rabbi Regina Jonas’ ordination in 1935. Daniela’s uncle was still taught by Regina Jonas in Berlin in the 1930s until his deportation in 1938. Daniela served congregations both in the UK and on the continent. Through her husband’s work she lived several years in Switzerland and India.

In the UK she was chair of a Council of Faiths for 11 years and still is the chair of the trustees of the same and gives talks and leads training on Diversity. She has completed all manner of handicraft projects amongst others a quilt for the First Women Rabbis’ Network conference in London in 2003 in conjunction with the Women’s Rabbinic Network of the US and as a passionate knitter she has designed and made an LJ scarf. 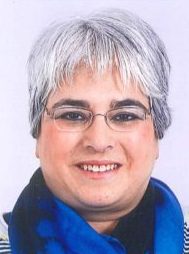