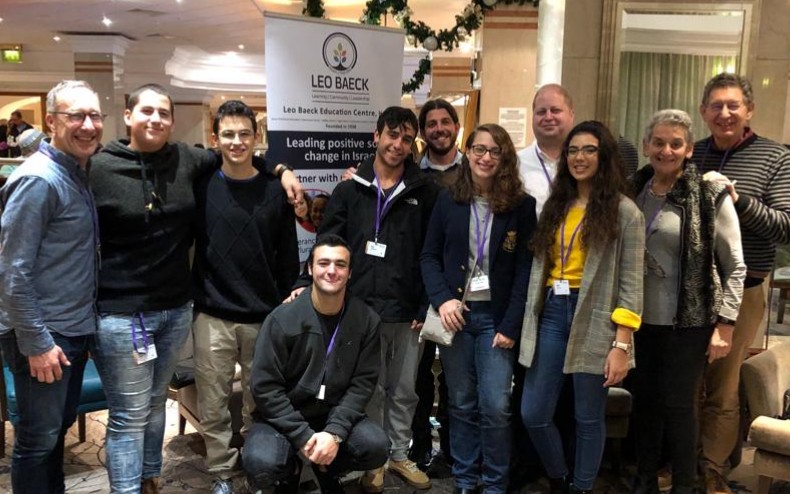 Israeli high school pupils made a small piece of Limmud Festival history, by becoming the first teenagers from the country to take part in the UK’s biggest celebration of Jewish learning and culture.

Six students from the Leo Baeck Education Centre in Haifa, led by Rabbi Oded Mazor, took part in seminars and activities, engaged in conversations with participants of all ages, volunteered in various roles and led two sessions of their own.

Their sessions were titled ‘Points of View from Israeli Teens’ and ‘Sources of Inspiration for Israeli Teens’ and saw them share their understanding of Israel, Judaism and Jewish peoplehood, as well as their dreams and goals for both themselves and their country.

He said: “The Leo Baeck Education Centre, the largest institute in Israel affiliated with Reform/Progressive Judaism, aims to challenge its students with questions about our Israeli reality and their personal choices as responsible and active citizens, as well as take them a few steps further in their spiritual journey.

“The unique experience of the Limmud Festival was a wonderful opportunity for our students to experience Jewish life in the diaspora, its challenges and strengths, relations between the two communities and their role in it as young adults. Plus it was really fun!”

Sixteen-year-old Noga Zoller was one of the students, all aged between 15 and 17, taking part in Limmud for the first time. Noga said: “Limmud was extremely interesting and eye opening. I learned a lot about the lives of Jews in the diaspora and acquired a better understanding of my own Jewish identity.”

The delegation was also joined by the chair of the Liberal Conference of Rabbis and Cantors, Rabbi Aaron Goldstein, who is also the chair of the UK Friends of the Leo Baeck Education Centre (pictured above).

Limmud chief executive, Eli Ovits, told how the participation of the Israeli students at Limmud was a big success and he hopes this will encourage others to take part in future events.

He said: “Limmud Festival is a community that welcomes people of all ages and backgrounds who come together to learn from one another.

“Having a Leo Baeck school delegation participate therefore served two critical purposes. First, it exposed the students to global Jewry thereby broadening their horizons and strengthening their Jewish identities. Second, through these students, we learned about Israel’s diversity and future.

“Our hope is to make this an annual occurrence that will reach many more young Israelis.”