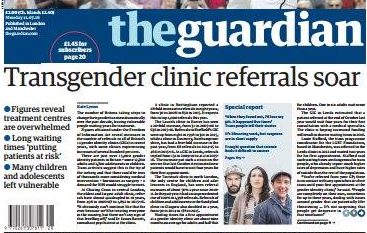 Surat-Shaan Knan, the project manager of Liberal Judaism’s ground-breaking Twilight People initiative, has appeared on the front page of The Guardian newspaper.

He featured in an article titled ‘Transgender stories’, where five people told the paper about their experiences.

Surat-Shaan said: “Being trans and Jewish seemed a complete oxymoron. I thought, it can’t be, I have to decide between them. But I had this wonderful community at Liberal Judaism to give me all that space and time to come out.

He added: “A lot of people from mainstream trans communities ask me, how can you be a person of faith, because even part of your own religion have been so horrible to LGBT people in general and trans people specifically? That’s true. But it’s about what faith means and leaving out what some leaders and institutions do with it.

“We are created in the image of God. I am part of that as a trans Jew.”

Surat-Shaan runs Twilight People, the landmark project that discovers and celebrates the hidden history of transgender and gender-variant people of faith in the UK past and present. It is supported by the National Lottery, through the Lottery Heritage Fund, and hosted by Liberal Judaism.

The Twilight People exhibition is on tour around the country and currently running at the University of Salford, Manchester. It can be found in the foyer of the university’s MediaCityUK building in Salford Quays until July 25.

The exhibition features images, videos and stories, describing the experiences of more than 40 members of different faith groups, including Christians, Muslims and Jews.

Rabbi Danny Rich, Liberal Judaism’s senior rabbi, said: “The Twilight People project goes from strength to strength; it is so important to raise awareness around diversity and inclusion – especially in this current socio-political climate. I am proud that people in the Manchester area will now get to interact with this wonderful exhibition.”