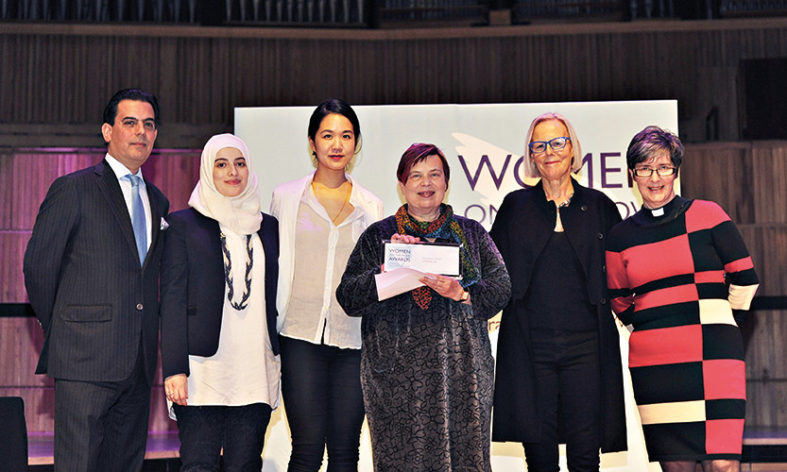 Janet – who is rabbi at South London Liberal Synagogue – was part of the Citizens UK group who won the Champions of the Year prize at the Women on the Move Awards at the Royal Festival Hall on Friday March 11.

Citizens UK is the largest broad-based community organising alliance in the UK and has been campaigning on refugee and migrant issues for more than a decade.

The award recognised how Citizens UK has promoted the rights of refugees and migrants in the past year – successfully campaigning to increase the number of Syrian refugees resettled in the UK in 2015, as well as helping to find appropriate homes for families, creating the National Refugee Welcome Board and coordinating the ‘refugees welcome’ movement in 85 towns and cities.

Most recently, Citizens UK won a major legal victory for children in the refugee camps in Calais, who have relatives in the UK, which will enable these children to come and join their families and have their applications for asylum examined here.

The judges concluded: “Citizens UK went beyond what would be expected from mainstream civil society groups to show their support for refugees and migrants, including women, and that is why they have been named Champions of the Year.”

She told a packed crowd: “South London Liberal Synagogue is a member of South London Citizens and, since 2014, we have been campaigning for our local councils to publicly commit to take at least 50 Syrian refugees from the camps in Jordan and Lebanon, to put the pressure on our government to accept more people, and to ensure that Britain does its fair share in this humanitarian crisis.

“On 36, some say 46, occasions, the Torah warns us against the wronging of a stranger. For us, this is core teaching and not an optional extra.”

The Women on the Move Awards celebrate and support the contribution that migrant and refugee women, the media and their champions can make towards facing down prejudice, supporting integration and inspiring others.

The awards formed part of the Southbank Centre’s Women of the World (WOW) Festival and were co-hosted by the UN Refugee Agency (UNHCR) and Migrants Organise.

Talking about her involvement with Citizens UK and the campaign to resettle refugees, Janet added: “I have become increasingly involved with the work we are doing with the children of Calais. There are around 150 unaccompanied minors there who have nuclear family here and who should be able to be reunited with them.

“I co-chaired the memorial we held for a fifteen year old, one of the boys we were working with there, who decided he couldn’t wait any longer and hopped on a lorry. He died in horrific circumstances in that lorry.

“And for me, that was the deal breaker – I knew I couldn’t live with myself if I didn’t do everything I could to make sure there were no more dead children.

“We are in the middle of a long and painstaking campaign, but it does finally look like the system is beginning to work – a couple more children’s claims have been accepted this week.

“Community organising is able to make real change in systems, not just put sticking plasters over problems. That is why I do it.”

The ceremony also saw Mariam Ibrahim Yusuf named as Woman of the Year. Mariam arrived in the UK in 2008 fleeing war and gender-based violence in Somalia and leaving behind her two children, convinced that they would soon join her. But eight years later, having been detained, destitute and homeless, Mariam is still stuck in the asylum system. Wanting something positive to come out of her experience, Mariam has dedicated her time to campaigning to ensure that asylum seekers are not forced into similar hardships.

The Young Woman of the Year award was presented to 21 year-old Seada Fekadu. At the age of 16, Seada fled Eritrea and found her way to the UK, via Calais, on the back of the truck, on her own. She was quickly granted refugee status and soon started volunteering, becoming a mentor and a role model to many young people and a powerful advocate for many of those who often do not have a voice.

To find out more about the great work being done by Citizens UK and South London Liberal Synagogue to help refugees and migrants, please visit www.citizensuk.org and www.southlondon.org