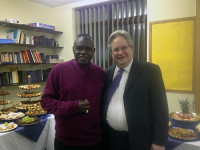 More than 200 people crowded into Hull Reform Synagogue to hear Rabbi Danny Rich, the senior rabbi of Liberal Judaism, and Archbishop of York, Dr John Sentamu, preach on the need for community outreach and collaboration between faiths.

Taking place on Friday February 26, the service was attended by members of Hull Reform Synagogue, York Liberal Jewish Community and Lincolnshire Jewish Community, as well as many others from local churches and faith groups, including Muslim and Hindu representatives. The explanatory service was ably led by Hull’s lay leader, Ian Sugerman.

The event marked a return home for Danny, who was assigned to support Hull Reform in the 1980s as part of his Rabbinic training. He was the student rabbi when the current synagogue building was consecrated in 1992.

Danny has maintained a strong relationship with the Reform congregation in Hull since that time, despite going on to become the senior rabbi and chief executive of Liberal Judaism.

He said: “It was great seeing a mix of new and familiar faces from the Progressive Jewish movements and beyond our walls. Coming back to Hull is always special for me, especially when speaking alongside someone as inspirational as the Archbishop of York.”