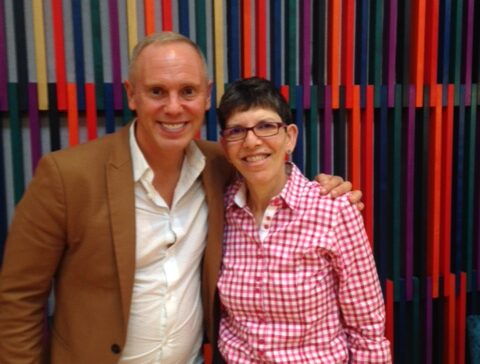 Brighton & Hove Progressive Synagogue were delighted to welcome Rob Rinder – star of Strictly Come Dancing and Judge Rinder – to speak at a cross-communal gathering at the synagogue on Sunday.

Rob spoke about what his Jewish inheritance from his family means to him and why he is a proud Progressive Jew. He said: “Being Jewish is not about what you don’t do, it’s about what you bring.”

He also spoke about his work as a defence barrister dealing with cases all over the world, including handling homophobia directed at him personally, his Judge Rinder cases on TV, his commitment to social and legal justice, the ‘privilege’ of having a public voice and what it felt like to become a celebrity.

The synagogue’s Rabbi Elli Tikvah Sarah (pictured with the star) said: “An eloquent and captivating speaker, Rob Rinder made us laugh and he made us think. Apart from his obvious talents, he is also a a brilliant LGBT Progressive Jewish role model.”