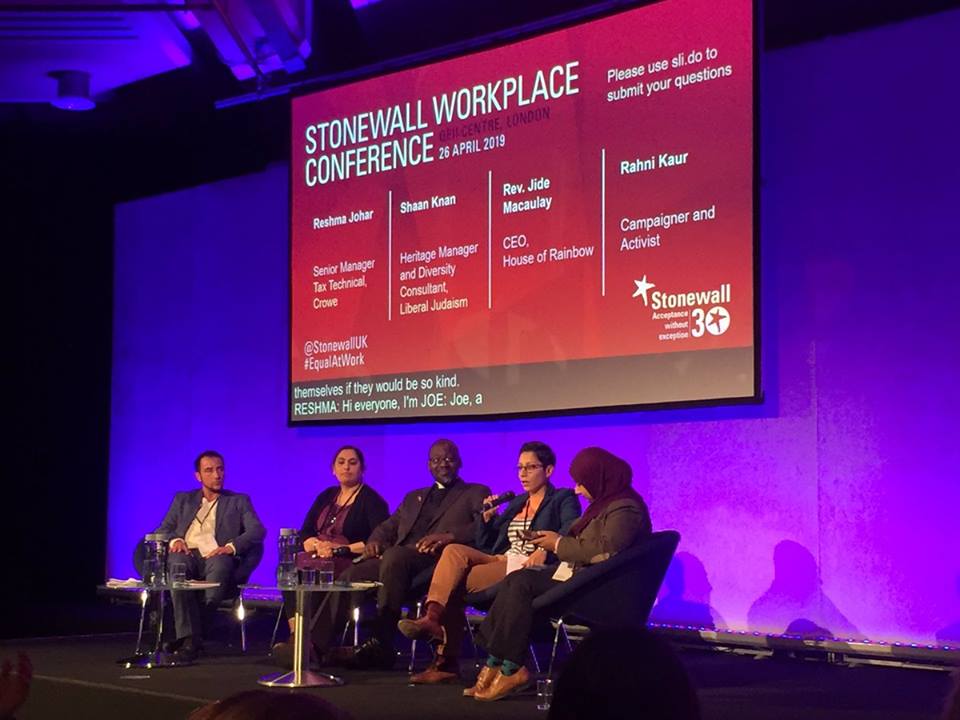 Shaan (pictured far left) was part of the event’s closing session debating issues around LGBT and faith. The panel also featured representatives from various religions including Reverend Jide Macaulay, an openly gay British-Nigerian Christian minister. It was chaired by Dr Masuma Rahim, a clinical psychologist and supporter of the Inclusive Mosque Initiative.

Taking place at the Queen Elizabeth II Centre, Westminster, Stonewall’s annual flagship event is Europe’s leading conference on lesbian, gay, bi and trans (LGBT) inclusion in the workplace. This year it coincided with Stonewall’s 30 year anniversary and was the largest so far with more than 800 delegates in attendance and another 400 watching online from workplaces and offices in all sectors and all around the world.

Shaan said: ‘It was such an honour to discuss what we have achieved at Liberal Judaism, in terms of equality and inclusion in the workplace, with such a big and distinguished audience and fellow panellists.

“People commented that they felt really inspired by our LGBTQI+ projects such as Rainbow Jews and Twilight People. It shows that we all have the power to change hearts and minds!”

Other presenters at the conference included Stonewall’s CEO Ruth Hunt , who is stepping down from this role in August 2019, and the Government Minister for Women and Equalities Penny Mordaunt.

In her keynote speech, Ruth Hunt said: “While it’s remarkable how far we’ve come we can’t be complacent. This year we’ve seen yet more hatred directed at trans people and nation wide debate develop around the ‘morality’ of LGBT inclusive relationships and sex education. And we’ve seen this debate used to further anti-faith sentiment and outright Islamophobia, driving further bitter divisions into our communities.

“Without doubt we have work to do and now more than ever we need to stand together.”