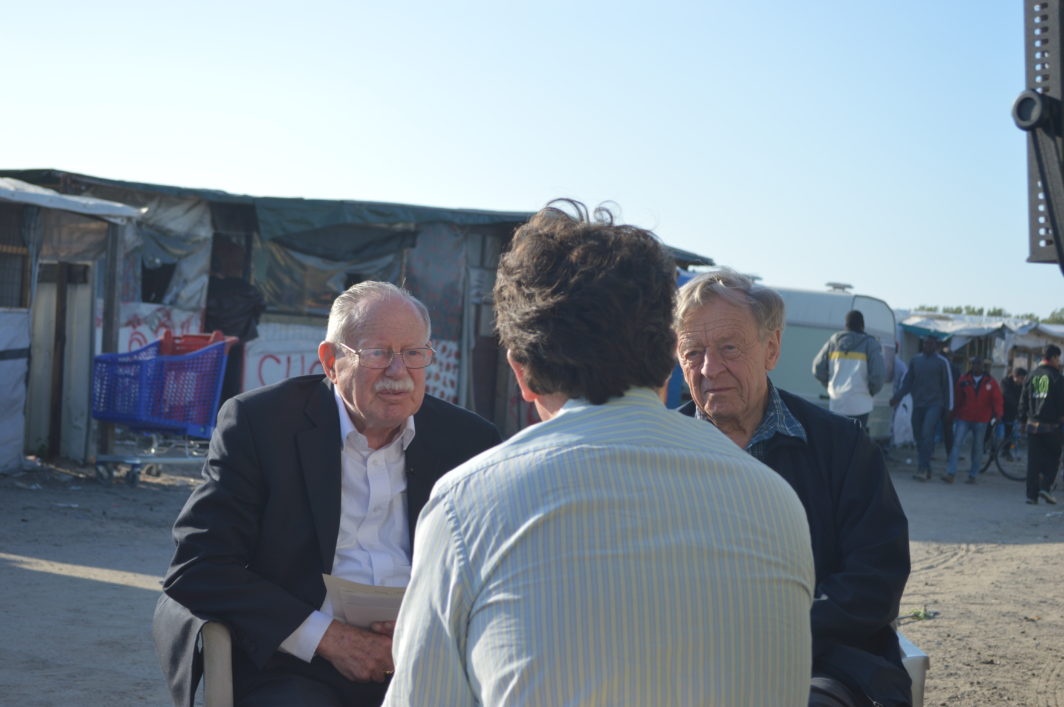 Lord Alf Dubs and Rabbi Harry Jacobi, who were given sanctuary in Britain when they fled Nazi-occupied Europe as children, travelled to Calais this week to meet child refugees. In a show of support to children who have a legal right to be with their families in the UK, they delivered school books and dictionaries. Today they are calling on the Home Secretary to speed up family reunification for children in Calais who have families in the UK, so that they can be reunited by September, in time to start school.

Citizens UK have identified 157 unaccompanied children in Calais who have a legal right to be with their UK-based families while their asylum claims are assessed. With the help of Citizens UK’s lawyers, the authorities have been reuniting children with their families in the UK since March, however, at the current rate of three children a week, it will take a year to reunite all the children in Calais.

Today Lord Alf Dubs and Rabbi Harry Jacobi have written to the Home Secretary to ask her to speed up family reunification. In their letter they describe the precious gift of education given to them by Britain, and how that education has enabled them to give something back to Britain. They go on to say:
“The Prime Minister has already promised to speed up family reunification for refugee children stuck in Europe trying to reach their families in the UK. The evidence we have seen shows that it is still taking too long. We ask the Home Secretary to take action to reunite the 157 children stuck in Calais with their families in the UK in time to start school in September.”

Wahid, a 14 year old boy from Afghanistan who is in Calais but has a legal right to come to the UK, said: “I last went to school two years ago. This was before my father disappeared – after that I fled my country with my brother. I hope to join my brother in the UK soon so I can go back to school and improve my English. I like sciences, so I hope to study one day to become an engineer.”

Rabbi Janet Darley of the South London Liberal Synagogue, spokesperson for Citizens UK, said: “The children we met this week in Calais are desperate to learn. They have families in the UK who are waiting to look after them. There is no legal or moral justification for them missing out on their education.”

Iona Lawrence, Coordinator for Citizens UK’s Calais programme, said: “On average, the children we are working with in Calais with have been out of education for three years. Add that to the months they have spent living in the “jungle” and you get a very desperate situation. We are working hard to reunite them with their families in the UK, but every stage of the process is taking too long, and many are losing hope.”

Lily Caprani, Unicef UK’s Deputy Executive Director, said: “The Prime Minister says unaccompanied children should be brought to the UK if they have family here, yet these children’s cases are moving far too slowly. I’ve just been to Calais and met the children who are still stranded there, waiting, in terrible conditions. The Jungle is no place for a child.

“The longer these children have to wait, the more desperate they may become and the more likely they are to risk their lives fleeing the appalling conditions of the Jungle to reach their families. By taking immediate action, the Government can change their situation right now and show it’s serious about its recent commitments to refugee children.”

Josie Naughton, of Help Refugees, said: “In addition to the children in Calais who have family in the UK, there are hundreds more children, and many of them are alone. All children have a right to education. We are seeing the deterioration of these young people left alone with no structure, no school, and as time goes on increasingly no hope. It was so moving for the children to meet Alf and Harry; men who shared a similar experience, and gave them hope that their current situation is not the end of the road.”

Citizens UK are urging people to take action to encourage their local councils to accept refugee children, more information is available at http://www.refugees-welcome.org.uk 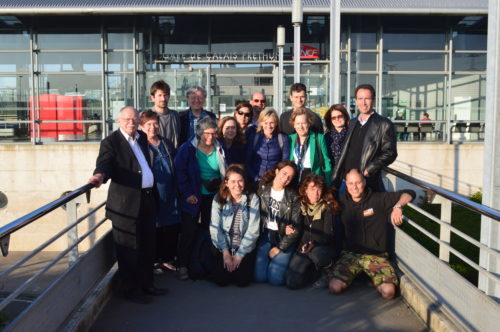 The full text of the letter is below:

Dear Home Secretary,
When we arrived in Britain, fleeing the Nazi occupation of Europe, one of the most precious gifts given to us was to be able to continue our education. Many Kindertransport survivors went on to achieve success in their fields; there were four Nobel prize winners, mathematicians, composers and doctors. The education we were provided with enabled us to give something back to Britain, and we were proud to do so.
This week we travelled to Calais to meet unaccompanied children who Citizens UK are helping reunite with their families in the UK. We delivered school books and dictionaries with the humanitarian organisation Help Refugees. On average, the children we met had been stuck in the Calais “Jungle” for up to seven months and had been out of education for three years. Much longer than we ever were.
The Prime Minister has already promised to speed up family reunification for refugee children stuck in Europe trying to reach their families in the UK. The evidence we have seen shows that it is still taking too long. We ask you [the Home Secretary] to take action to reunite the 157 children stuck in Calais with their families in the UK in time to start school in September.
Yours sincerely,
Alf Dubs and Rabbi Harry Jacobi
FAMILY REUNIFICATION – THE STORY SO FAR

Citizens UK, the national community organising charity, working with a team of lawyers, religious leaders and volunteers, has been working to reunite children in the Calais ‘Jungle’ camp with their UK-based families since last year.

Background
The Dublin III Treaty governs EU asylum applications and says that refugees must claim asylum in the first safe country they enter. In practice this means that states use Dublin III to deport refugees back to the frontier of Europe. Dublin III also says that refugees with nuclear family in a third country should claim asylum on entry to the EU and can then formally request that the third country “takes charge” of their asylum application. In practice this rarely happens, not a single child made a successful take charge application from France to Britain since the system was established in 2013 until the intervention of Citizens UK’s lawyers in March this year.
The main barriers to the effective functioning of these provisions in France are the 3 month wait for a minor to be assigned a legal guardian and subsequent 6 month wait for their claim to be lodged and a take charge request issued. The minors are also deeply distrustful of the French authorities, live in highly dangerous and unstable conditions, and then have to contend with the very high standards of evidence the Home Office requires to accept the request to take charge.

Islington Law Centre, Bhatt Murphy and Citizens UK worked together to bring the cases of four Syrian boys to court in the UK in January. The court ruled that because of their right to family life they were entitled to be reunited with their loved ones while their asylum applications are considered in Britain. The court decided that rather than proceeding through the full and formal “take charge” process it would be sufficient, given the conditions in Calais, for the lawyers to write to the French authorities claiming asylum and that on receipt of proof of this the Home Office should admit them to the UK.

In February, French lawyers took France to court to trigger a faster release of take charge requests, but no institutional remedy has been established to make this the norm. Meanwhile the Home Office has successfully sought permission to appeal the January decision and refused two subsequent take charge requests released via the expedited issuance following the French courts. However, on 21 March for the first time, children were reunited with their families in the UK following the Home Office accepting take charge requests. So far, 30 children from Calais have been reunited with their families in this way.

Citizens UK have identified 157 children in Calais who have a legal right to come to the UK to claim asylum under Dublin III.
Citizens UK is the national home of community organising – a network of over 350 faith groups, schools and colleges that work together for the common good. They have been campaigning on the Syrian crisis for over 18 months and created www.refugees-welcome.org.uk to help coordinate the public’s response.

So far Citizens UK efforts to persuade councils to participate in resettling Syrian refugees have persuaded 44 councils to offer 3,097 places. They’ve identified 700 private landlords who are offering properties, persuaded a dozen universities to offer £3.5 million of scholarships for refugees and successfully challenged the Prime Minister to resettle at least 1,000 people before Christmas.