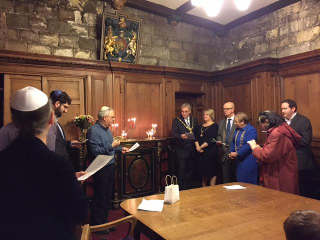 The York Liberal Jewish Community (YLJC) held a first ever civic candle lighting at the York Guildhall for Chanukkah, in the presence of the Lord Mayor, the Deputy Leader of the Councillor, Keith Aspden, and representatives of the Conservative, Labour and Liberal Democrats groups.

The Rt Hon the Lord Mayor of York, Cllr Sonja Crisp, addressed the meeting which was attended by more than 50 members of York’s growing Jewish community aged from 0 to in their 80s.

She said: “As everyone knows, over 800 years ago York was the scene of a terrible massacre which effectively wiped out its Jewish population. There is a common assumption that following the massacre Jews stayed away from York, an assumption even common amongst some Jews so I am told. It’s not true however.

“There is evidence that, certainly within a generation and possibly within five years, Jews were back within our city walls, with a commitment to rebuild and integrate. There was a medieval synagogue just yards away on Coney St, a Jewish cemetery on Jewbury and I am told that Jubbergate actually means street of the Jews.

“In common with all England’s Jews, the Jews of York were expelled from 1290 and didn’t return until Cromwell’s time, when the Jews came back to York. In the 19th century a small synagogue was opened on Aldwark and functioned until 1975.

“We are proud of our Jewish population and therefore so proud to have an active religious Jewish community back in York once more.”

She added: “I am told you opened your doors in the Friargate Quaker Meeting House only last year and have gone from strength to strength.

“It is an important that our community here is one of all faiths as well as of none and we will do whatever we can to ensure that now the Jewish community is back formally worshipping in York you enjoy our full support.”

“The story of Chanukkah is a story of a miracle: after a difficult period, facing an evil tyrant, the Jews overthrew their Greek rulers and rededicated their temple. It was a long road back but it has a lesson for our time: however small the Jewish light may get, it cannot be extinguished and we are delighted that tonight in particular it shines every more brightly in York.

“I wish you all Chanukkah Sameach, a very happy Chanukkah.”

Responding on behalf of YLJC, Ben Rich, Chair of the community, said: “We are delighted to have been welcomed to this beautiful venue in the heart of York. This is a really special occasion for our community and it is hard to imagine anywhere in Britain in which Jews are made to feel more welcome and at home.”