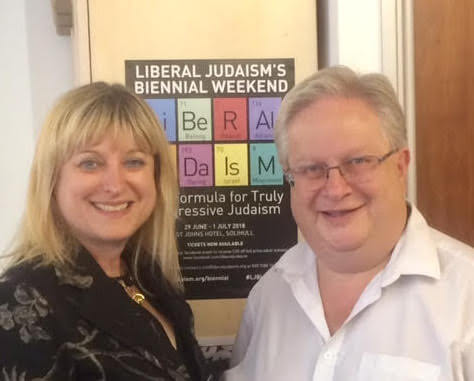 Rabbi Danny Rich, Liberal Judaism’s senior rabbi, returned to work early from his current six month sabbatical in order to welcome the new president of the Board of Deputies to the Montagu Centre.

Danny met with Marie van der Zyl at Liberal Judaism’s London head office to discuss a number of matters of mutual interest, including fighting antisemitism and working alongside other faith groups.

Marie, who was elected as president last month, serves on the management board of West London Reform Synagogue and becomes only the second female to hold the position, following Jo Wagerman (2000-03).

Danny said: “Marie wanted to come to the Montagu Centre early in her tenure as president and I am delighted that she has. While the Board represents all sections of the Jewish community, through her role at West London she is very aware of and sympathetic to Progressive Jewish issues.

“We discussed a number of topics, especially our shared interests in interfaith matters, inspiring young people to get more involved in the Jewish community and combatting antisemitism and other forms of discrimination, including the controversial actions of the coroner who tried to delay Jewish funerals.”

Danny also sent congratulations to Stuart MacDonald, a member of The Liberal Jewish Synagogue, who was re-elected unopposed as the Board of Deputies’ treasurer.

Danny’s formal return to work will be the Liberal Judaism Biennial Weekend, which begins on Friday June 29.