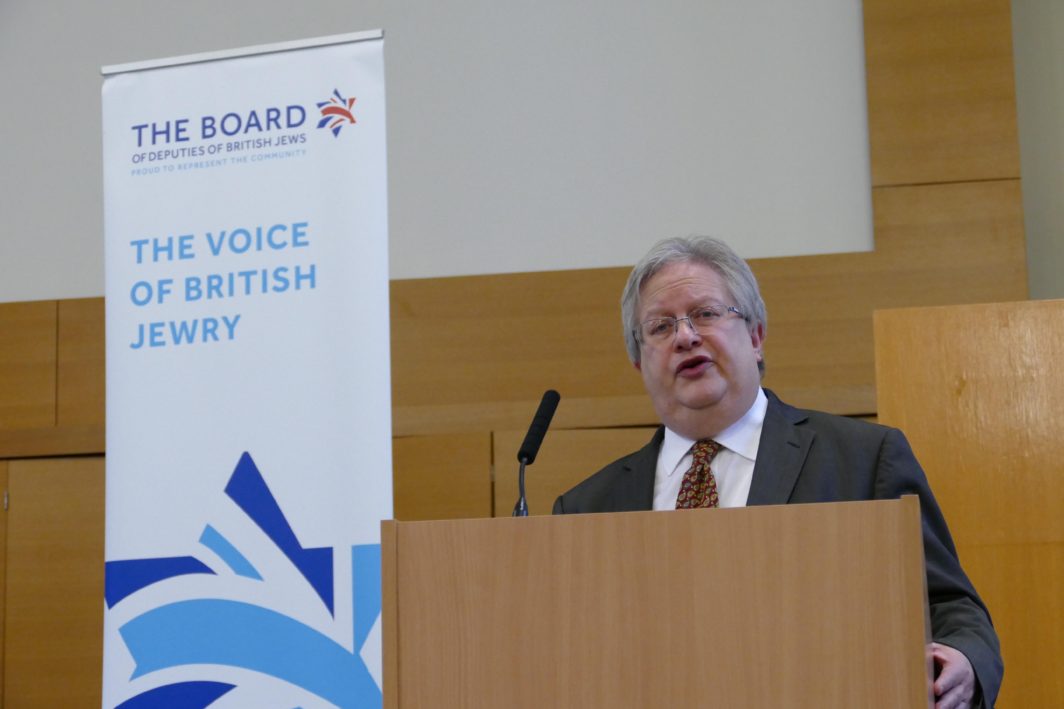 On the 20 November, Rabbi Danny Rich became the first leader of Liberal Judaism (Chair, Senior Rabbi and/or Chief Executive) to address the UK Board of Deputies. In the meeting he highlighted the historical relationship between Liberal Judaism and the Board – key moments including the 1949 mass resignation of all the Deputies from Liberal synagogues over the issue of marriage recognition, but also the election of the first LJ VP to the Board in 2000. Danny re-iterated LJ’s commitment to the board, before going on to explore the relationship between Isaac and Ishmael in this weeks Parashat contextualised against recent political events. Concluding that the mission of the modern Jew is l’or goyim: a light of nations – an agent of good fortune.

You can read Rabbi Rich’s address below.

Mr President, Deputies, friends: Let me begin by acknowledging the voluntary efforts of the Board’s Officers and all Deputies and pay tribute to the increasingly professionalism of the Board’s staff. It is a great pleasure to be invited to address you this morning and I want to acknowledge the history of this moment since it appears that I am the first professional head of Liberal Judaism to have been asked to address a Board meeting.

Liberal Judaism was founded in this country in 1902 and, despite an approach from the Board in 1915, it was not until 1922 that the Liberal Jewish Synagogue (LJS) – at that time the only Liberal synagogue in the United Kingdom – joined the Board in spite of worries about retaining religious independence, particularly for the purposes of marriage and the equality of women.

As Liberal Judaism grew so its level of representation increased although in 1949 all Deputies from Liberal synagogues resigned over the issue of marriage recognition – a matter which took a decade or so to resolve. There were to be further occasional skirmishes but mutual respect between Liberal Judaism and the Board was surely demonstrated when Tony Sacker, of the Northwood and Pinner Liberal Synagogue and a former Chairperson of Liberal Judaism, was elected as a Vice-President in 2000. Since that date Deputies from Liberal synagogues and Liberal Judaism Deputies themselves have contributed to the work of the Board including Jerome Freedman, a member of the Constitution Committee for the past 16 years and its former Chairman, and the current Treasurer, Stuart MacDonald. To conclude this part of my remarks let me simply say that Liberal Judaism remains committed to the Board, even if it does not always agree with what is said and done on the Board’s behalf and continues to appreciate that the Board is one of the few British Jewish communal institutions where so many disparate parts of the community have an opportunity to come together and to further the collective interests of the community in a democratic manner.

In shuls across the land yesterday Jews will have heard Parashat Va-yera (Genesis 18:1–22:24) in which Abraham receives a visitation and learns that he and Sarah are to be rather elderly parents, argues with his Creator about the fate of Sodom, expels his first born son Ishmael and the child’s mother, Hagar, into the desert, and finally undergoes with Isaac the incident known as the Akedah, the Binding of Isaac. The details are well known to you but from its opening sentence we learn ‘V’ha-Elohim nisah et Avraham: And God put Abraham to the test’. I am confident that you will have asked yourself: What was the nature of the test? Has not Abraham proved his loyalty so often before? and What was a pass and what a fail?

These and other question are, of course, not new and I want to remind you of the comment given in Midrah Rabbah (55:2) in which Rabbi Jonathan, utilising the Psalm (11:5) verse ‘The Eternal One seeks out the righteous’, recalls that ‘the potter does not examine defective vessels, because he cannot give them a single blow without breaking them. What then does the potter examine? Only the sound vessels, for he will not break them even with many blows. Similarly HaKadosh Baruch Hu tests not the wicked but the righteous’. When a potter removes two pots from the kiln he tests with his hammer not the cracked one because he knows it will break but rather the one that appears perfect, the strong one which he believes is robust enough to withstand the blows.

Whether you were a Remainer or a Brexiter last June and whether you preferred Hillary to Donald or the other way around, it is perhaps true to say that ‘democracy’ is in testing times and as both Jews and members of society we are certainly challenged by uncertainty and by the promotion of unacceptable ideas whether on the websites of nominated officials or in actions on the street themselves. My first thought was with the Midrash in the sense that if democracy is undergoing a testing time it is perhaps better that it is tested in the two most robust democracies in the world, that of the United Kingdom and of the United States of America. Moreover, democracy has, I suggest, served both the Jewish people and humanity well and in spite of its flaws – and it is not for me to suggest that either the Brexit vote or the election of Donald Trump is a flaw – I share the sentiment of Winston Churchill that ‘democracy is the worst form of government, except for all those other forms that have been tried from time to time.’ Let me be clear, I am not suggesting that we are not vigilant. Indeed it behoves those of us who consider ourselves democrats to be more active if we think democracy is being perverted but what I fear as much is cynicism about democracy which can be equally applied to public plebiscites and elections as it can be applied in our own community. Whether I agree with the statement or action of those we elect to office – and from time to time I may robustly and loudly not – I remain grateful for those who take up elected office within our community and without and accept that their motives are good unless they unequivocally demonstrate the opposite.

I am sure you are further aware that when the rabbis selected a haftarah they always tried to end the reading on an upbeat note, even if that meant a few additional verses. Confidence in the ultimate triumph of good over evil – and never despair – remains the watchword of Jewish theology and history.

Let me, as I move to a conclusion, return to the Torah, to next week’s parashah, Chayyei Sarah (Genesis 23:1–25:18). We learnt yesterday that it was rivalry and competition between Ishmael and his younger sibling, Isaac, which was to lead to Sarah suggestion that Hagar and Ishmael be cast into the desert, a matter which ‘distressed Abraham greatly’ (Genesis 21:11) although he carried out the act after soothing advice from the Eternal One.

The Torah does not tells us at this point what Ishmael thinks of Isaac or how Isaac considers Ishmael and it is left to the imagination of the reader until these words ‘Va’yik’b’roo oto Yitzchak v’Yishmael banayv: And his sons, Isaac and Ishmael buried him (Abraham)’ (Genesis 25:9). This is the sum of the detail but it appears to show a matured Ishmael – supported by a reference in the Babylonian Talmud (Baba Batra 16b) – with an ability to have forgiven his father and being reconciled with his brother.

In the face of challenges to our very democracy – and to the divisions that have been opened widely in British and American societies – we Jews need to be vigilant, not cynical; confident, not despairing; and, above all, instruments of reconciliation.
That is how I understand the mission of the Jew, to be, in the words of Isaiah (42:7 and 49:6), l’or goyim: a light of nations – an agent of good fortune.

A worthy aspiration for the Board of Deputies of British Jews too!