Rabbi Anna Gerrard grew up in the Masorti movement and became involved with Birmingham Progressive Synagogue while reading Theology as an undergraduate at Birmingham University.

She worked for Liberal Judaism from 2005, running their Young Adults programme, and served as a Student Rabbi for Gloucestershire Liberal Jewish Community.

In July 2011, Anna was ordained by Leo Baeck College, having spent half of her studies in Jerusalem at the Conservative Yeshiva, Hebrew Union College and Machon Schechter.

She now continues her work for GLJC as well as Herefordshire Jewish Community. Anna is committed to dynamic, progressive Judaism that speaks to today’s Jew, interested in thinking about Liberal Judaism’s relationship to the State of Israel.

Anna is passionate about wild swimming. 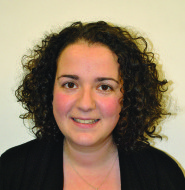