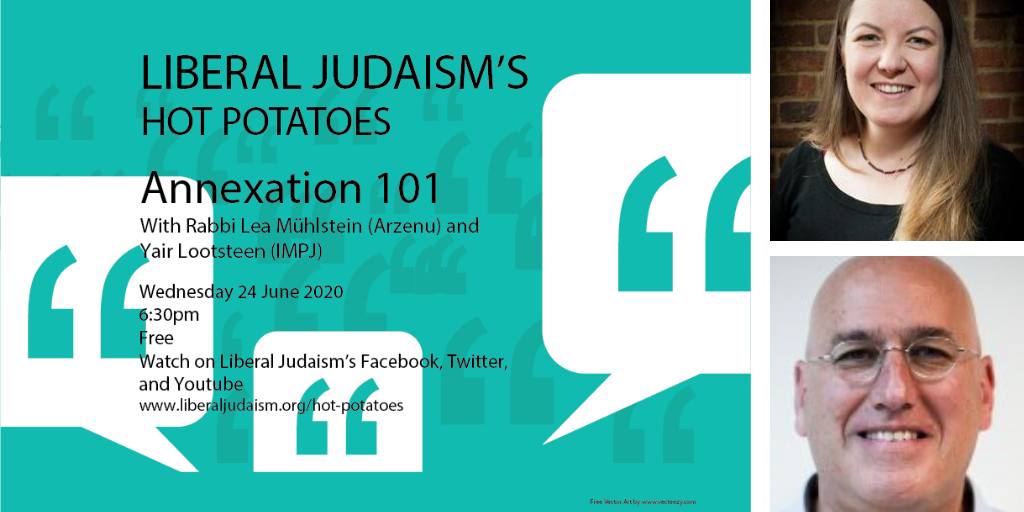 Yair Lootsteen and Rabbi Lea Mühlstein gave a fantastic insight at our latest Hot Potatoes event – which you can watch again on our Facebook, Twitter and/or YouTube  pages.

Yair is the deputy chair of the Israel Movement for Reform & Progressive Judaism (IMPJ). Born in London, Yair grew up in Toronto and made Aliyah in 1979 – residing in Jerusalem ever since. A lawyer, Yair served in the IDF’s Military Advocate General Corps for 23 years, completing his term of duty in 2007 with the rank of Colonel. He held several challenging positions during his military career, the last being as the legal advisor to the IDF in Judea and Samaria. Since completing his regular IDF service, Yair has invested much of his time on issues relating to Jewish pluralism in Israel. As well as his role with the IMPJ, Yair serves on the Executive Board of the World Union of Progressive Judaism (WUPJ) and is a member of the Israel team of Arzenu – the International Federation of Reform and Progressive Religious Zionists.

Lea, who serves Northwood & Pinner Liberal Synagogue, is the international chair of Arzenu. Born and raised in Germany, Lea was ordained from Leo Baeck College in 2012. The main focus of Lea’s communal work is education and social action. She holds primary responsibility for the education provisions at NPLS, including the cheder and the regular adult education programme. As the international chair of Arzenu, Lea works to represent the interests of its constituent groups in 14 countries around the world, as well Progressive Jews more generally, within the governing bodies of the Israel’s National Institutions (the World Zionist Organization, the Jewish Agency for Israel, Keren Kayemeth LeIsrael and Keren Hayesod). She is currently the only member of the Executive of the Jewish Agency under the age of 40.